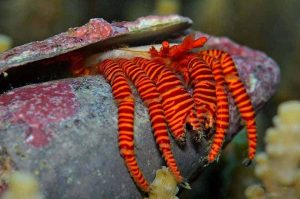 Hermit crab species that thrive in reef tanks consume an almost exclusively algal and detritus diet. They also spend their days crawling across the rocks and substrate of your natural seawater aquarium (Saltwater, Sea water, NSW). Due to their size, they won’t disturb the items in your tank.