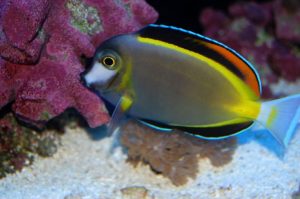 These two species prefer the highly oxygenated water around the surge zone above the reef. They also prefer a habitat with plenty of hiding places. As with other Surgeonfish, they will tolerate other Tangs but prefer to be with their species.

Sailfin Tang
Sailfin Tangs do not play well with other Sailfin Tangs, just like most of their family members. Two of them will fight if they are together. They are very territorial creatures. The razor/spur on their tails makes them capable of cutting each other up when they fight. We recommend not putting more than one in a tank.

An aquarium with plenty of room for the Powder Brown Tang to move and hide would be a good idea. During the day, it enjoys grazing on algae in a well-established aquarium.